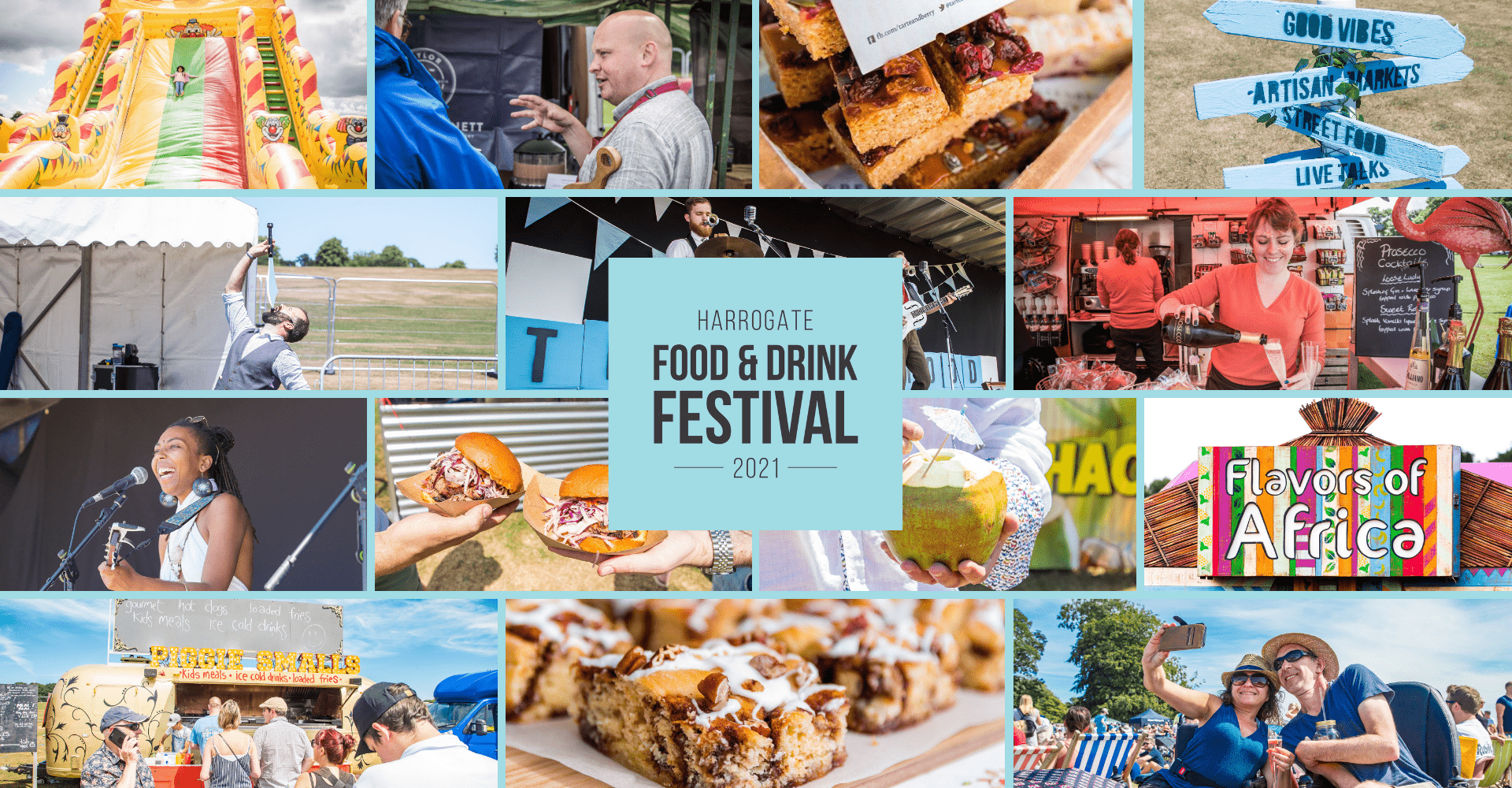 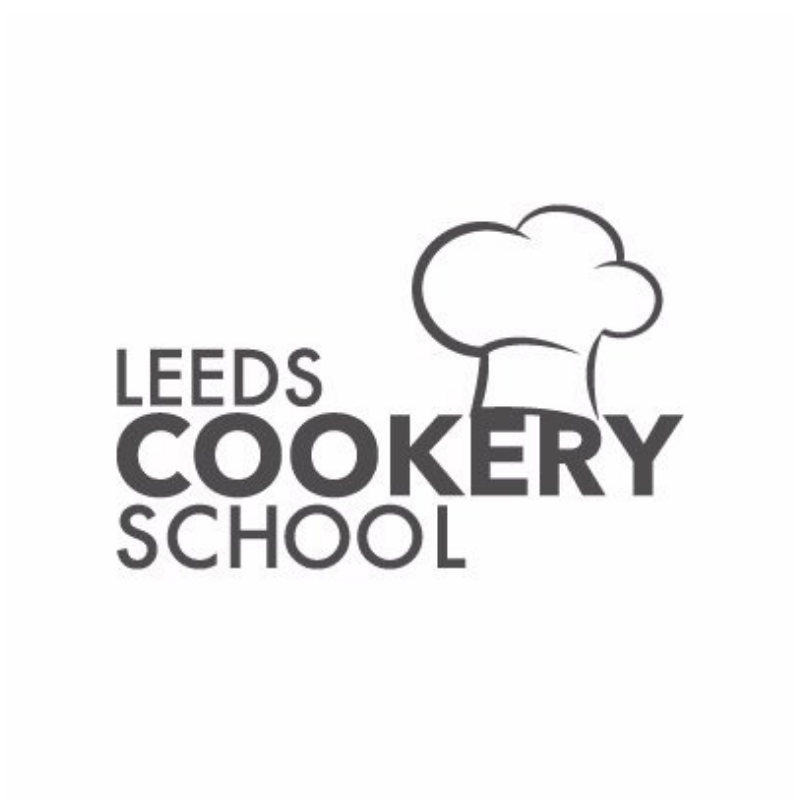 Back for 2021, Leeds Cookery School and Yorkshire Food Guide will be hosting an incredible weekend of cooking demonstrations, with both established and up-and-coming chefs in the region showcasing their skills.

Thinking of joining us? This live entertainment is included in the price of your ticket! 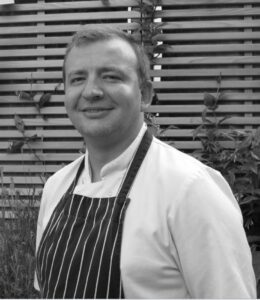 Anthony is a self-taught cook, turned chef, turned cookery teacher, originally from Newcastle-upon-Tyne. He progressed to the semi-final stages of the 14th series of Masterchef, and currently spends his time delivering and designing cooking classes, from beginners to more advanced home cooking.

After winning a work experience placement at London’s renowned restaurant, The Dorchester, Stephanie Moon embarked on a 4-year journey in multiple countries on which she won the gold medal in The Fine Foods Salon Culinaire competition in Sydney. In 2009, she went on to start her own business – All Things Food, where she has worked with businesses large and small to realise their potential and mentored students to Michelin-starred first jobs. A recognised figure on the Yorkshire food scene and has many accolades to her credit.

Born in Saigon, Vietnam, Loc started to learn to cook from his grandparents at the age of five, and aims to pass on some of that tradition, experience and joy by running his own cookery classes.

Scott has always had a real passion and love of cooking, food, wine and teaching.  He has an extensive knowledge of food and cooking. He left school at 17, and enrolled at Leeds Thomas College and has been cooking ever since! Scott has worked in senior positions in country house hotels and restaurants throughout Yorkshire He has travelled widely and spent 6 years in Australia, cooking in a range of fine dining restaurants in Sydney including two years at The Bennelong restaurant at Sydney Opera House. He taught for 17 years Leeds City College, formally Thomas Danby College and one of his biggest rewards is seeing his former students going on to have very successful careers in the hospitality industry both locally and internationally. Scott has developed a wide range of contacts both locally and nationally in the food and hospitality industry and is keen to use these to deliver contemporary, fun and informative classes at the Cookery School.

Callum Bowmer joined Rudding Park in 2010 for two weeks work experience. However, having spotted his potential, the Hotel Manager, offered him an Apprenticeship. Starting in the Conference and Banqueting Kitchen, Callum was fast-tracked to the restaurant, Clocktower where he loved the dynamic of the restaurant kitchen and was given the opportunity to create his own dishes. To gain additional experience Callum did a six month stint at Baslow Hall, Derbyshire before returning to Rudding Park in 2012. A familiar face on the Yorkshire cookery demo circuit, Callum enjoys the chance to showcase his dishes at events including The Great Yorkshire Show and the Spring and Autumn Flower Shows.  However, a particular career highlight was featuring on BBC’s MasterChef The Professionals in 2017. In 2016 Callum moved to Horto to help open the new fine dining restaurant at Rudding Park. Horto Restaurant uses seasonal ingredients from Rudding Park Kitchen Garden where the menu is dictated by nature, the skill of the Gardener and the flair of the Chef. Callum was promoted to Head Chef at Horto Restaurant in 2019 where has gone on to retain 3AA Rosettes. 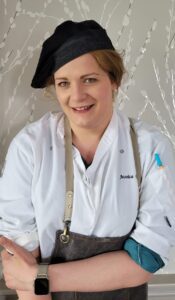 Jess Cullum is Head Chef at the picturesque 2AA Rosette Devonshire Fell. Before joining the Fell in 2020, Jess began her culinary journey working for the Midland Hotel whilst studying English Literature and Linguistics at Lancaster University. It was meant to be a bar job to help pay her way through university, but by chance, Jess ended up in the kitchen and the rest as they say is history… she’d found her passion for the industry. After graduation, Jess began a career with TUI and worked in over eight countries, helping to establish her cooking style; French classical and contemporary British. Jess has previously worked at the notable Northcote Manor and Waldorf Astoria in Edinburgh and in her spare time has a passion for travel, reading, walking and is a lover of beans on toast! La Casita started with a vision to introduce a more modern take on the classic Spanish food culture. It has gone from strength to strength as they continue to celebrate everything Spanish. Executive Chef Simon Miller said: “With a background in fine dining and Michelin restaurants, tapas were a side step for me but I soon fell in love with the food, culture and the social aspect of sharing.” Simon Miller continues to create new and exciting flavours in every mouthful.

Anthony is a self-taught cook, turned chef, turned cookery teacher, originally from Newcastle-upon-Tyne. He progressed to the semi-final stages of the 14th series of Masterchef, and currently spends his time delivering and designing cooking classes, from beginners to more advanced home cooking. 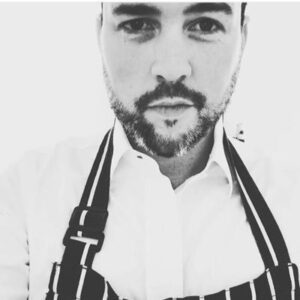 With restaurants in both Leeds and Harrogate, Stuzzi presents traditional recipes that sit alongside modern Italian cooking and street food essentials. Co-founder Brett Lee will be demonstrating a delicious range of authentic Italian dishes. 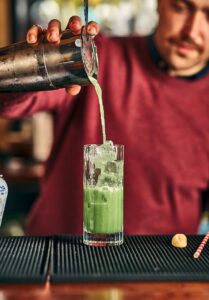 Three’s A Crowd is a modern gastro pub in Harrogate, serving quality British food in a relaxed setting,
using the best possible ingredients. With their ever-changing food menu and exciting drinks list,
they’re the perfect place to share a meal with friends and family.
Charles has teamed up with Havana Club to give a masterclass on all things rum. From the history of
rum production to finding out how they make their signature TAC Nuclear Pina Colada. Be sure to
turn up and be part of Three’s A Crowd’s afternoon of rum fun. 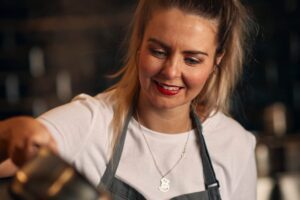 Natalie Firth is the chef owner of Just The Fox Kitchen, an event catering and premium meal prep
delivery company based in Yorkshire.
Before Natalie started Just The Fox Kitchen she was the Executive Chef for Matt Healy’s Gron Kafes where she really fell in love with creating recipes that were delicious and nutritious. Natalie has a real passion for creating meals that are vibrant and full of flavour, taking inspiration from around the world and her travels. Natalie uses quality ingredients, creating positive working relationships with other small business like the local butchers, fishmongers and green grocers. There is no negative diet culture here, Natalie believes in the concept on intuitive nutrition and eating food that makes you feel great inside and out. Natalie will be cooking one of her signature nourish bowls: Feta stuffed meatballs, with charred courgettes, jewelled Israeli cous cous, roasted garlic yogurt, salsa verde and crushed hazelnuts. 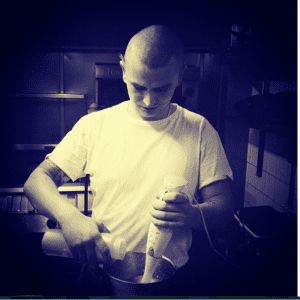 Co-Founder and Head Chef of Shears Yard, Jamie Clinton is known for his unique styles of cooking
and Nordic-influenced cuisine. Shears Yard is located in Leeds centre – as an independent bar and
kitchen it has a contemporary set menu with a variety of interesting flavours. 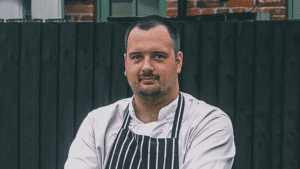 Jess Cullum is Head Chef at the picturesque 2AA Rosette Devonshire Fell.
Before joining the Fell in 2020, Jess began her culinary journey working for the Midland Hotel whilst studying English Literature and Linguistics at Lancaster University. It was meant to be a bar job to help pay her way through university, but by chance, Jess ended up in the kitchen and the rest as they say is history… she’d found her passion for the industry. After graduation, Jess began a career with TUI and worked in over eight countries, helping to establish her cooking style; French classical and contemporary British. Jess has previously worked at the notable Northcote Manor and Waldorf Astoria in Edinburgh and in her spare time has a passion for travel, reading, walking and is a lover of beans on toast! 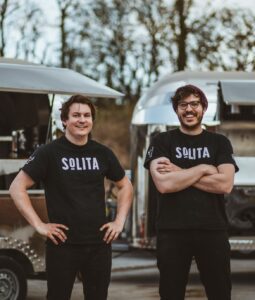 Serving trendy eats across the north of England.

Chris grew up inspired by the culinary world. At a very young age he held positions at esteemed restaurants and gastro pubs. He used his time off to learn from the best spending time in the kitchen with Heston Blumenthal & Tom Kerridge in restaurants like the Hand & Flowers (2* Michelin Star) and The Fat Duck (3* Michelin Star).

After almost ten years in the industry Chris set about starting the company, initially taking the restaurant to the street with various ‘back of the car’ pop ups! Now, Chris manages the group day to day but still enjoys rolling up his sleeves and getting involved. There’s just no keeping him out the kitchen. 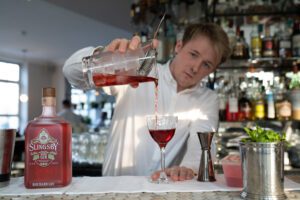 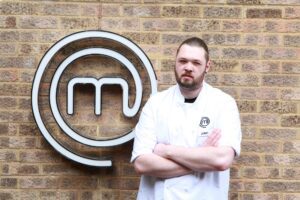 A Professional Chef for over 16 years and a proud Yorkshireman, Jono has spent many years training
in some of the UK and the World’s best restaurants including, most notably Michelin Starred, Noma
(Denmark), Quay Restaurant (Sydney) and The Box Tree (Ilkley).
Jono is one of the most creative and talented chefs emerging onto the UK Culinary scene, with his
appearance on the BBC’s MasterChef: The Professionals 2020 further elevating his profile. Jono
impressed judges Monica Galletti and Marcus Wareing as well as critics Grace Dent and Tom Parker-
Bowles who revered his inventive style and meticulous execution on his way to the final.
Michelin-starred Andrew Wong too loved his take on the Chinese classic Dim Sum, securing him a
spot in the finals.
“Jono without a doubt is different and there’s a lot of things he’s doing; he’s pushing the
boundaries.” – Marcus Wareing

The Cookery School at The Grand York 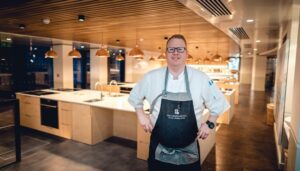 Based in York’s finest hotel, The Cookery School at The Grand opened in March 2019 and offers
express, half and full-day courses focussing on a selection of International cuisines and speciality
class. Led by Head Tutor, Andrew Dixon, the Cookery School is designed for novice and aspiring chefs, with classes inspired by cuisine from around the world.
Andrew brings nearly 30 years of culinary experience to The Cookery School at The Grand York. The
former 3 AA Rosette restaurant owner turned professional cookery lecturer, has a mission of
creating an environment which becomes a place to relax, have fun, make friends and try something
new, as well as learning new skills in the kitchen. 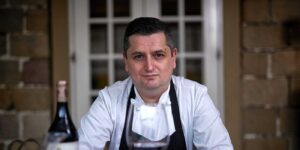 Peter Howarth is Head Chef at the 3 AA rosette Burlington Restaurant at The Devonshire Arms Hotel
& Spa. Peter joined the Burlington in November 2019 having worked with top-class hotel restaurants,
including Head Chef at The Samling, which held three AA rosettes, and prior to this, Head Chef at
Gidleigh Park and The Latymer, both of which held two Michelin stars and five AA rosettes.
Peter has a love of travel which influences his individual style of cooking, which he would describe as
‘Modern British with world influences’. He aims to use the abundant ingredients available from the
Bolton Abbey Estate and the county as a whole, whilst incorporating flavours from further afield too.
Taking advantage of the wonderful produce we find in Yorkshire, Peter will be cooking a lamb dish
using Herdwick lamb, bred in North Yorkshire, paired with vegetables fresh from the Burlington’s
own kitchen garden. 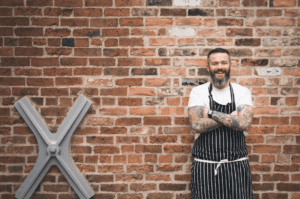 Masterchef: The Professionals finalist and Executive Chef of Gron Kafe, Matt Healy will be joining us
with a variety of dishes. Gron Kafe has restaurants in Leeds, Harrogate and York, and specialises in
Scandi-inspired vegan and vegetarian breakfast food and clean eating. 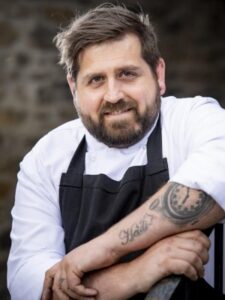 Jon, originally from Middlesbrough, learned his trade in the Leicestershire area before
moving to pursue his passion closer to home. Jon has been with the Blue Lion for over 4
years now and thrives on the vast array of local produce available to him. He has set his
sights on pushing the restaurant to new levels while keeping in line with the character of the
Blue Lion.
The Blue Lion was originally built as a shooting lodge and evolved into a coaching inn around
1840. Paul and Helen Klein took over the Blue Lion in 1990 to make it what it is today. Whilst
there have been alterations and amendments over the years, as the Inn is a Grade II listed
building, attention to retaining the character and history of a Dales inn has been paramount.